Note: this article is based on an interview with Robin Carnahan in May 2021 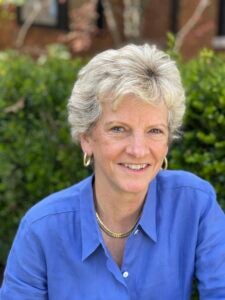 When asked what first drew her to a career in public service, Robin Carnahan has a surprising answer: a swimming pool.

When Carnahan was 10, she visited the newly built community pool in St. James, Missouri—the neighboring community to her hometown of Rolla. With its pristine fixtures and amenities, the St. James public pool was worlds away from the run-down pool she’d grown up with in Rolla.

“I remember going home and asking my parents, ‘How is this possible?’” Carnahan said. The younger Carnahan was indignant—why couldn’t her hometown enjoy a clean, up-to-date public pool like the one in St. James? “And what I got was a lesson in how to make things happen for the benefit of a community.”

Carnahan comes from a family of public servants—her father, Mel, served as the governor of Missouri, and her mother, Jean, was the first woman to serve Missouri in the US Senate, among other notable roles—so discussing community improvement projects around the dinner table was a staple of her childhood.

“They told me about this thing called a bond issue, and that the people in town could vote to build a new swimming pool,” Carnahan said. “So I organized all the kids in my fifth grade class to go door-to-door about [the swimming pool] bond issue.”

Come election time, Carnahan’s schoolyard advocacy paid off; the bond issue passed and a few years later Rolla had its own brand new swimming pool. It was a hands-on lesson in how civic engagement could lead to significant, real-world changes.

Carnahan has now been a committed public servant for more than 30 years. As Missouri’s secretary of state, as the director of state and local at 18F, and now as the administrator of the General Services Administration, she has maintained a razor-sharp focus on improving the way people interact with public services and servants.

“Often it’s people without a lot of political power or voice that most rely on government and government systems to access needed services,” Carnahan said. “So unless you personally go through the experience of trying to use them, it’s part of the unseen infrastructure of government for the greater public.”

Modernizing that unseen infrastructure was a key focus of Carnahan’s work during her tenure as a fellow at the Beeck Center for Social Impact + Innovation at Georgetown University. Alongside her research partner Waldo Jaquith, the duo set out to learn all they could about what it would look like for agencies and governments across the country to share software platforms rather than their typical practice: building custom, department-specific software in silos.

Prior to starting their research, Carnahan and Jaquith estimated that, because of the similar day-to-day functions of state and local governments across the country, equivalent agencies and departments have about an 80-percent overlap in their software needs. Therefore, the creation of shared platforms across government entities would likely reduce risk, cost, labor, and, most importantly to Carnahan, improve the scope and quality of what public officials could offer their constituents. Once they dug into the research, what they found surprised them.

“There’s no name for something like this; you can’t just Google it,” Carnahan said. “But once we really started looking, we found more than 60 of these ‘software sharing cooperatives,’ some of which have been operating for decades. Even more interesting was that many of them thought they were the only one.”

As Carnahan and Jaquith’s hypothesis shifted, so did their mandate. After they published their landscape research—the first of its kind on the topic—they began focusing their energy and resources on bringing the members of these different software sharing collaboratives from around the country together to learn from each other and shine a brighter light on their utility. They also want to encourage other federal and state employees to share their software in a similar fashion, with the hope of expanding the practice.

Their research was largely conducted against the backdrop of COVID-19; the roughly 16-month-long public health crisis further highlighted the need for sharing effective digital tools and resources across government agencies, as many Americans struggled to procure critical public services (like unemployment benefits) via outdated and error-ridden government websites and approval processes. While painful, Carnahan said the pandemic has provided much needed momentum for modernization. Now, with the March 2021 passage of the American Rescue Plan Act, there is funding to match that momentum.

“It is governments’ job to deliver public services, so let’s help them do that really well,” Carnahan said. “One of the ways to improve delivery is by giving folks working in government easy access to modern infrastructure. How do we do that? By sharing.”

Over the course of her year-long fellowship at the Beeck Center Carnahan collaborated with other experts and government practitioners who—like herself—believe in the importance of modernizing public tools and services. With the other fellows and undergraduate and graduate student analysts serving as innovative co-creators, the Beeck Center proved an environment ripe for thinking of new ways to solve long-standing problems.

“Any time you’re trying to reimagine a system, it takes a little bit of knowledge about that system, but also an outside perspective to be able to really make it what it ought to be,” Carnahan said.

Making systems work seamlessly for the benefit of all also requires “using technology to do the work that technology does best, so that people can do what they do best,” a lesson Carnahan first learned in 2005, on her first day as Missouri’s secretary of state.

“I walked into the office on my first day … and there were more people physically opening envelopes to deposit checks for business license renewals than we had in our entire IT department,” Carnahan said. “I just thought, ‘Wow. we need to automate this.’ Doing that cut costs and red tape and created way better services for our customers: the people of Missouri.”

She spent the majority of her eight-year tenure as secretary of state automating various government systems and processes, and went on to focus on similar projects as the director of state and local at 18F. In recognition of her leadership in using cutting-edge digital tools to improve public service delivery, FedScoop named her a “Top Woman in Tech” in 2017. Carnahan believes that if people’s everyday interactions with government are productive, efficient, and effective, it can reaffirm their faith not just in their elected officials, but in democracy itself.

Carnahan is now bringing her decades of experience “helping government deliver” back to the federal government. Per the GSA press release announcing her confirmation, Carnahan is a “nationally recognized government technology leader” whose confirmation received broad bipartisan support.

Carnahan’s appointment, in many ways, is a fulfillment of the dreams she began formulating as a 10-year-old advocating for her community.

“When you have a vision about a thing you can do to help your community, democracy gives you a way to get people together to make it a reality,” she said. “It became clear to me [after the pool was built] that politics and government were the way for me to make my impact.”

Susannah Green was the Storytelling + Content Student Analyst at the Beeck Center in Spring 2021, working on copywriting, content strategy, and editorial management. She is currently finishing up her M.A in Georgetown’s Communication, Culture & Technology program, and she enjoys any opportunity to translate complicated topics into clear, compelling stories.